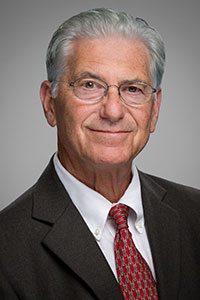 Mr. Slobasky began his intellectual property experience by serving for four years as a Patent Examiner of the U.S. Patent and Trademark Office, where his area of expertise was electrical communications. In 1972, he was appointed a trial attorney at the U.S. Department of Justice, Antitrust Division, Patent Section, specializing in patent and antitrust litigation relating to licensing and inequitable conduct issues. After almost four years in this capacity, Mr. Slobasky entered private practice with the Firm and has since been involved in all phases of intellectual property law. Mr. Slobasky has also served as an expert witness in patent infringement litigation and has argued several cases on appeal in the U.S. Court of Appeals for the Federal Circuit.